SeaWeek is Australia’s major national public awareness campaign to focus community awareness, provide information and encourage an appreciation of the sea. SeaWeek gives us a fantastic opportunity to promote educational issues of relevance to the marine environment.

In 2021 the SeaWeek theme is the sixth Ocean Literacy principle: The ocean and humans are inextricably interconnected. Find out more. 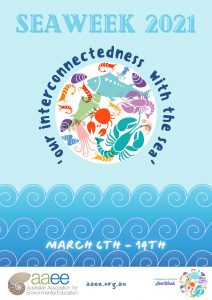 SeaWeek events are organised and run by environmental and marine educators across the country. If you'd like to organise and run a SeaWeek event, competition or activity during SeaWeek, we'd love to promote it!

Email seaweek@aaee.org.au and we'll add it here on the SeaWeek web page. If you have something to promote through Facebook, please share it in the SeaWeek 2021 Facebook page.

Join our Australian Marine Education Network and SeaWeek and be part of the conversation all year round. It's the best place to stay updated.

View our Seaweek Resources below where we showcase some of the resources created for past years.

What is Ocean Literacy?

Find out more about the Ocean Literacy Principles.

Australia is a marine nation. We have one of the largest ocean territories in the world, and it drives our climate and weather, generates employment, provides food and resources, and offers lifestyle and recreational opportunities (source CSIRO).

Between 1988 and 2014, 'Sea Week' was the Marine Education Society of Australasia's (MESA) major national public awareness campaign. With the recent closing of MESA, the co-ordination of the newly named 'SeaWeek' is now with AAEE and is the AAEE Marine Educators (AAEEME)  a Special Interest Group under the Australian Association for Environmental Education.

The following resources were developed by passionate volunteers for the Marine Education Society of Australasia. We hope you and your students find the resources engaging and fun.

The World Of Crabs

An entire unit of work on crabs! In includes a range of activities and games for students so you could choose to complete the unit or just use some of the activities and games as fillers or lessons. Many of the information and activities are web based and require Flash Plugin and an up to date web browser. The unit can be adapted for any age student, but probably best suited as is for Upper Primary.

The A To Z Of Australian Marine Life

A wonderful resource to have at your fingertips, this webpage has numerous applications for classroom teaching, particularly in Upper Primary and Middle Years Science. The associated link to “Using the A to Z in teaching” outlines a few ways to use the resource with students, including food chains and food webs, creating fact sheets, research tasks, literacy tasks and many more.

Although dated, this website gives teachers and students a detailed overview of Australian Seashores. It includes pages on Rocky Shores, Tides and Intertidal Zonation, as well as Environmental and Biological Factors affecting Australian Seashores. This is a useful resource for Middle or Senior High School Science or Geography Students looking at factors affecting biodiversity, ecology, taxonomy and coastal geomorphology. The premise of the website is for students to understand the zonation across rocky shores. As the name suggests, all information and examples are Australian. The website includes a WebQuest and questions for students as well as a list of research questions and information for exploring Australian Seashores.

The activities listed on this page are fun and still relevant to current topics within the Curriculum. Activities are aimed mostly towards Upper Primary Students and include:

This 61 page document includes information and activities for a wide range of topics involving sharks. Year levels of students for these activities range, with each activity clearly marked with targeted year levels. Topics include:

Oceans Of Life – Ours To Explore; Ours To Restore

There is a huge amount of information on the world’s oceans on this site. This could be adapted for something as simple as asking Upper Primary students to research the five oceans on Earth, right up to Senior High School Students learning about oceanography, ocean governance, bathymetry and the vertical zonation of oceans. There are also a number of teaching units for Years 1 to 9.

The resources created under this topic are immense and so useful! There are complete online teaching units downloadable as PDFs for Prep to Year 3, Years 4 to 7, Years 8 to 10 and Years 11 to 12. There are some really engaging information sheets which are also downloadable as PDFs. These have many applications for student research or even as stimulus material for writing tasks!